From a first timer's and a scholarship winner's point of view


This year, I was lucky enough to be awarded a scholarship to attend Apple’s annual Worldwide Developers Conference. It was a really great conference and I thought I’d share some of my experiences. I didn’t record nearly enough video to make a vlog, so this text and image heavy post will have to suffice.

While I got into San Jose on Saturday evening, the real fun didn’t start until Sunday. It was a little extra exciting for me, however. A few days prior, I had been contacted by Apple PR regarding some media opportunities happening prior to Check-In on Sunday. What they didn’t tell me, or any of us they were interviewing, is that Tim Cook was going to show up and check out our playgrounds or apps!

Nothing inspires us more than fresh ideas. Meet a few of the 350+ talented #WWDC18 student scholarship winners! pic.twitter.com/XHRQdgCugE

After the media event, I got my badge and boarded a bus with other scholars for… somewhere (well the guy checking me in spilled the beans but it was supposed to be a secret). Where? Apple’s new campus, Apple Park! They took us to eat at Caffé Macs (where I could not take any pictures), and then, for the main event, they walked us to the amazing Steve Jobs Theater!

The incredible lobby of the theater, with Apple Park in the distance

They took us down into the theater, and gave presentations about various aspects of Apple’s philosophy, from accessibility to localization.

My view walking into the Steve Jobs Theater

Everyone else walking into the theater (check out the amazing seating) 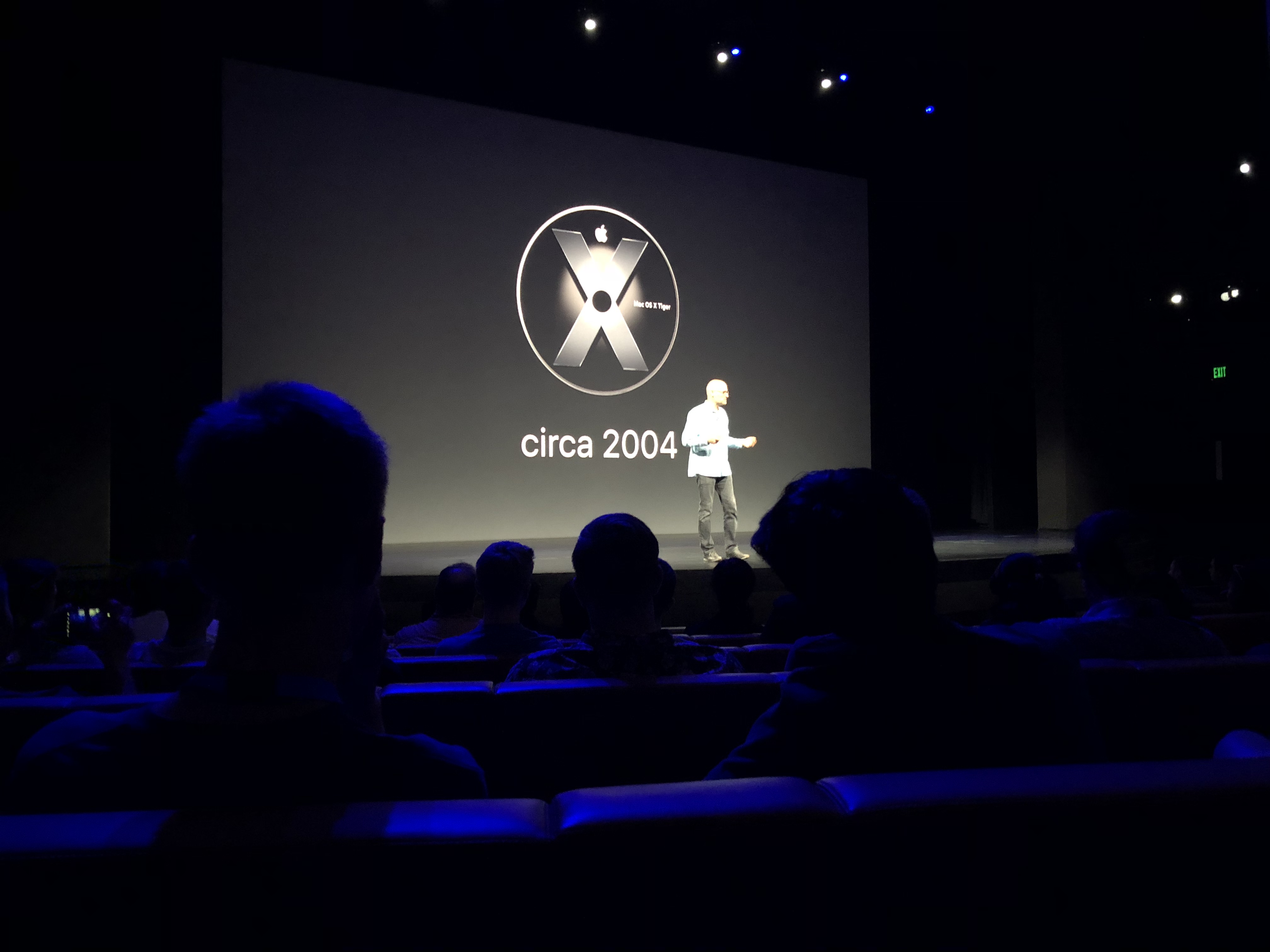 From the Accessibility talk, discussing the launch of VoiceOver in Mac OS X Tiger. 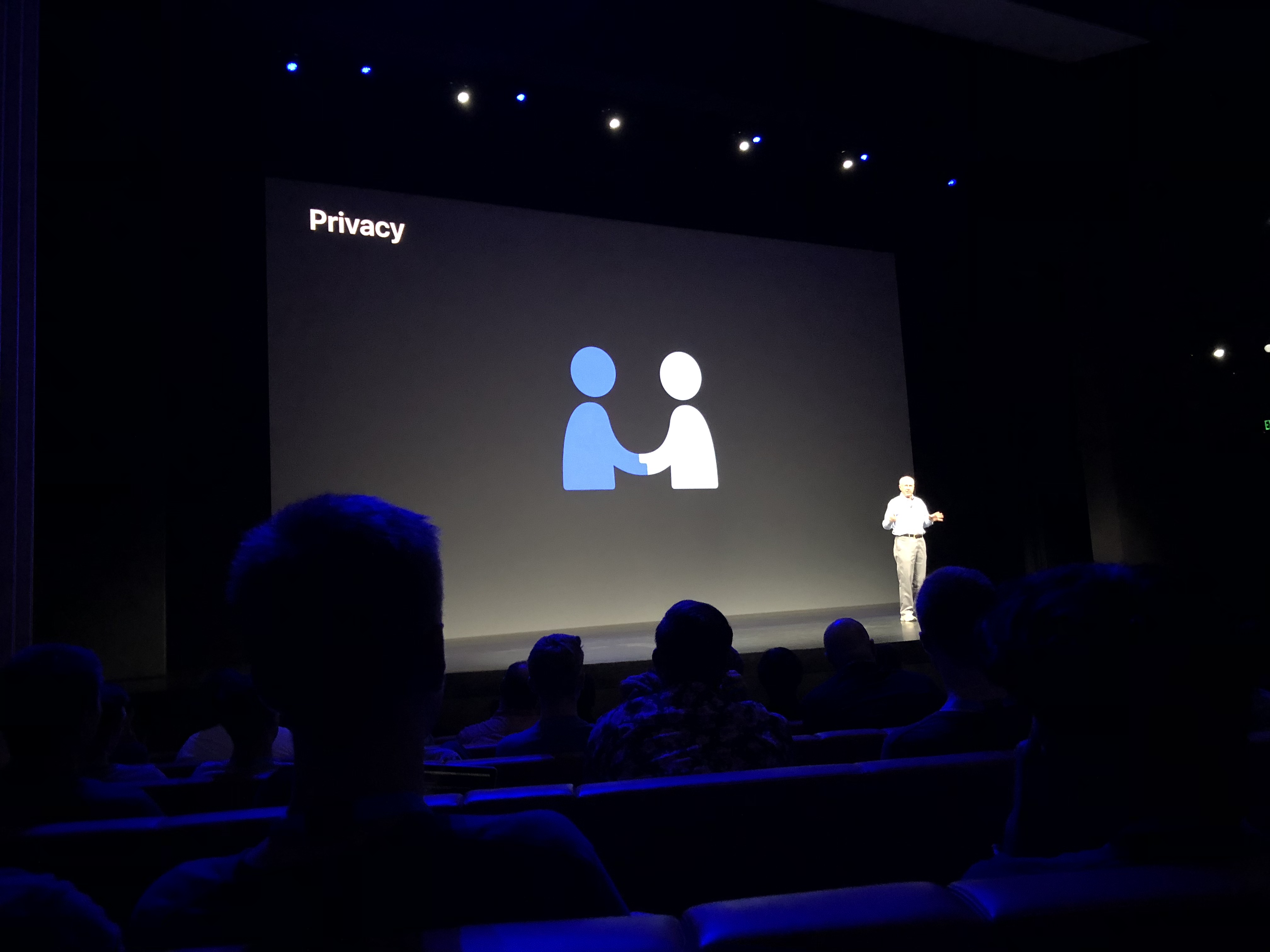 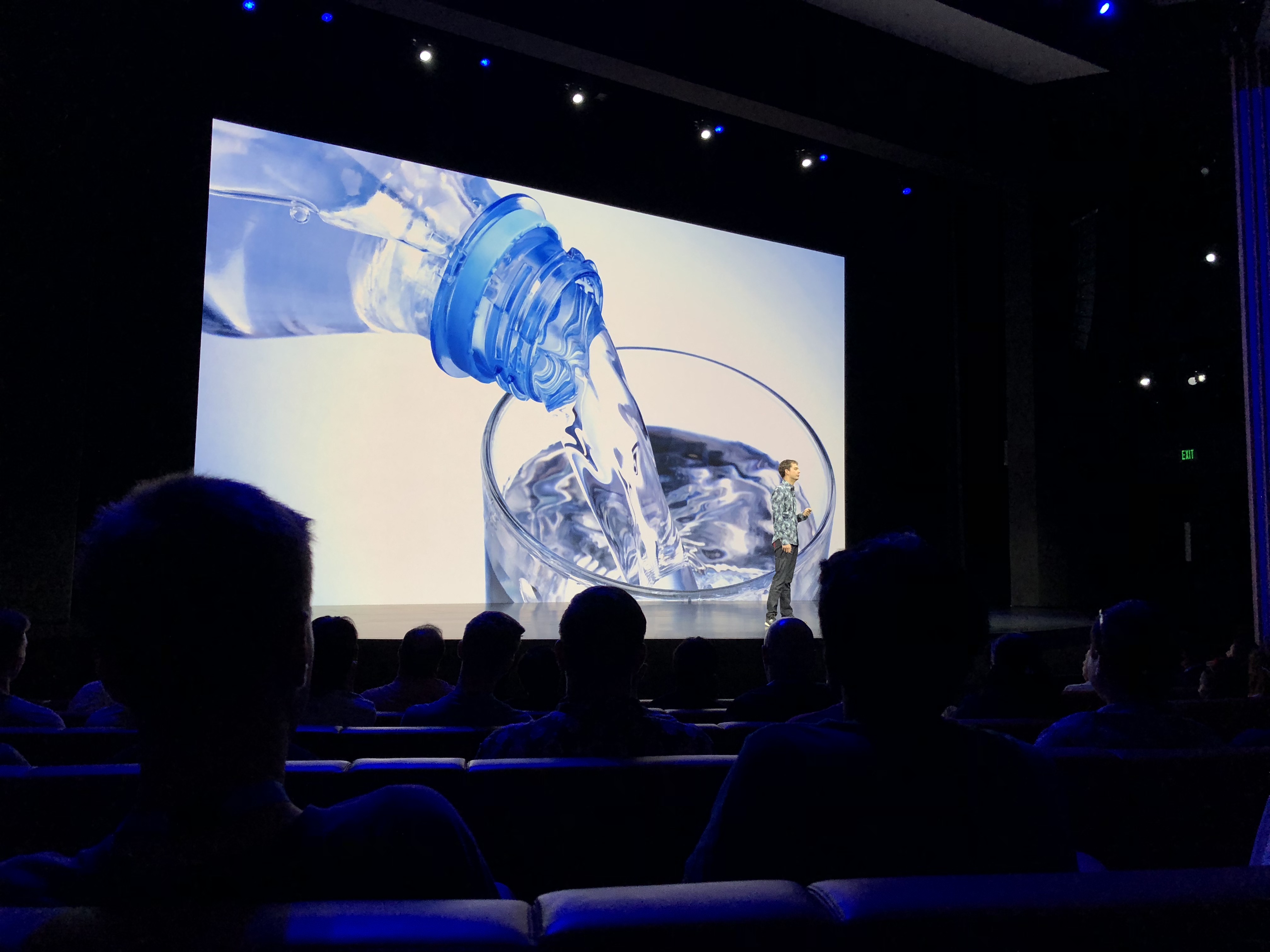 And Tim Cook showed up to say hi!

This theater is probably the one of the nicest theaters I’ve ever been in. It definitely spoils you to go there before the keynote day in McEnery the next day.

After the presentation, we went out into the lower lobby of the theater, where many Apple engineers were around chatting with us about their workflows, what kinds of stuff they build, and trying really hard not to say anything that would break the NDA. This lasted probably around 90 minutes or so, though some folks left earlier. It was really interesting to hear directly from Apple’s engineers how they work, and I’m really thankful to all of them that took the time to speak with us.

When we left, they did have one more surprise: AirPods! Every scholar got their own pair (which I gave away as a birthday gift a few weeks later, as I’ve had some for a while now). We exited right across from the Apple Park Visitor Center, where I could chill out, take in the views, and buy a MacBook power adapter I totally didn’t leave at home.

The big announcement day! Most people usually line up for hours, though as a scholar, I didn’t need to (I also had a seat guarunteed thanks to the kind folks on Apple’s Accessibility team). I arrived a few hours early, and was excited to hear Tim Cook say “Good Morning!” in person. Their setup for the keynote this year was really cool. They had a super-ultrawide screen in the center, as well as two other screens off to the side (which you don’t see as much of in the video). As an avid Apple Keynote viewer, this event definitely felt a little different, but I think some of that was the lack of the Gradient Keynote theme… 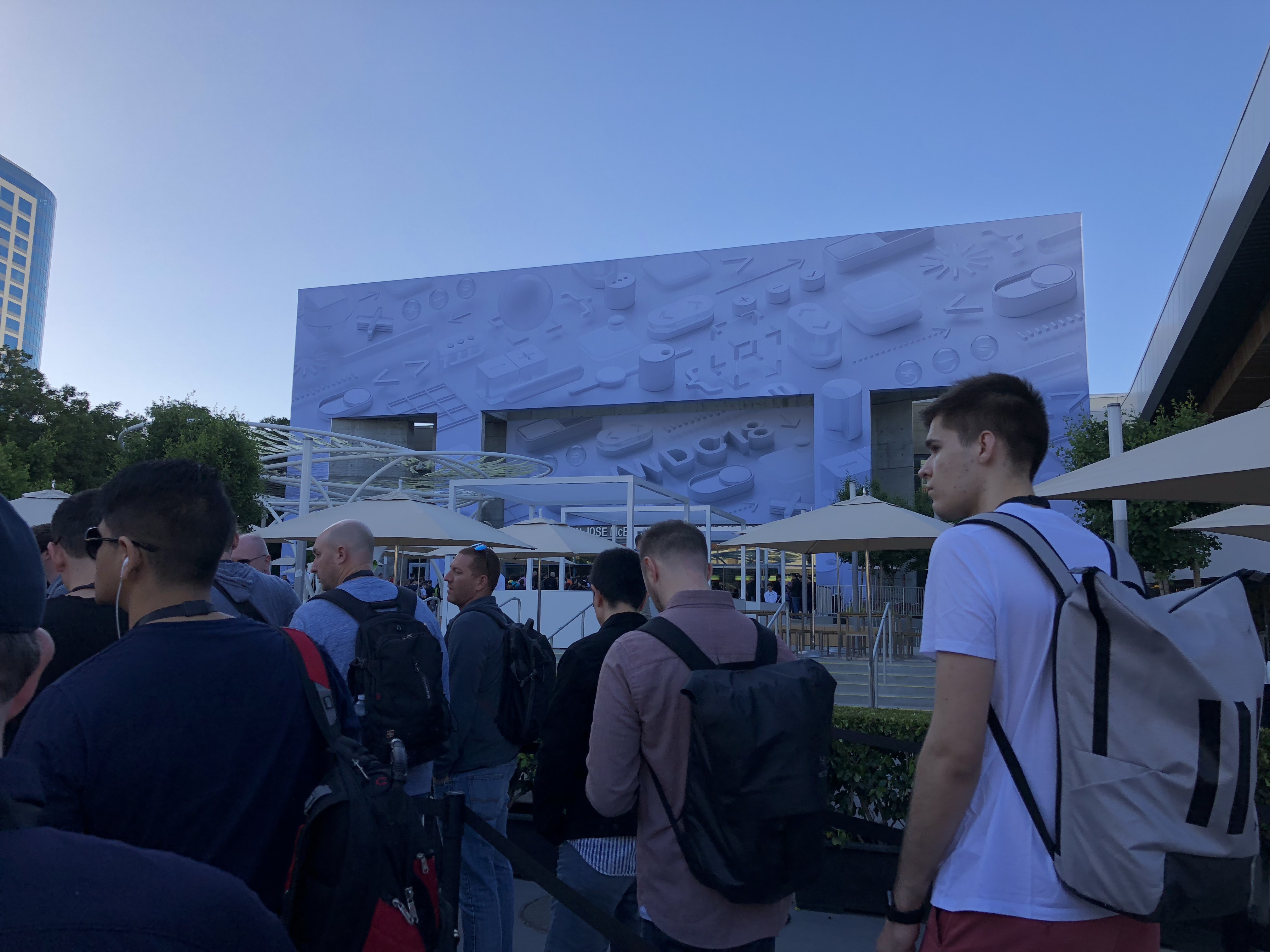 Line for the keynote.

Inside Hall 2 before the keynote

If you’re reading this, you’ve probably already seen the keynote, but just in case you haven’t here’s a link you’ll find handy

After the kewnote, there was lunch, lots of beta downloading, and the State of the Union! I don’t think I’m actually allowed to share any pictures of what the SOTU was like, but you can watch it freely on Apple’s site anyway.

After the State of the Union, I headed next door to see a live recording of the Accidental Tech Podcast (Thanks so much to the guy who had a ticket they didn’t need). Their show was really great and it was really cool to see them (and the crowd reactions) live. You can listen to the recording of the live episode here.

So technically most of the rest of the conference is under an NDA, at least in terms of taking pictures. But you can watch all of the sessions (minus the lunchtime sessions) online. I’ll link to the sessions I went to (plus a few I highly reccomend). Of note: The sessions I attended are just that, what I attended. Don’t use this as an end-all de-all list fo the only sessions you need to watch. All the sessions are great, and I encourage you to watch all of them that you’re interested in.

WWDC is broken up into two primary activities, sessions and labs. Sessions are presentations by Apple’s engineers, designers, and other teams teaching developers all about Apple’s new APIs and tools. Labs are a space where you can go and speak with Apple engineers on various teams about more specific questions about their framework, your use of it in your app, or some pesky bug you’ve had in radar for 3 years.

As a first timer, and someone who is not at all a professional iOS developer, I feel like I didn’t make as great a use of the labs as I could have. Most of me time spent there was trying to better understand frameworks like SiriKit, as opposed to having specific questions about my app. I see the great value in these labs for those that are professionals, and I highly reccomend you take time to go there in the future if you have any burning questions.

402 - Getting the Most out of Playground in Xcode

The Talk Show Live is always one of the most special shows at WWDC, because it’s the only place you see Apple executives interviewed in front of a live audience! This year, Greg Jozwiak and Mike Rockwell were on Gruber’s show discussing the past day’s events, with a heavy emphasis on AR. Make sure you check out the video of the show, if you haven’t already. It’s really great. 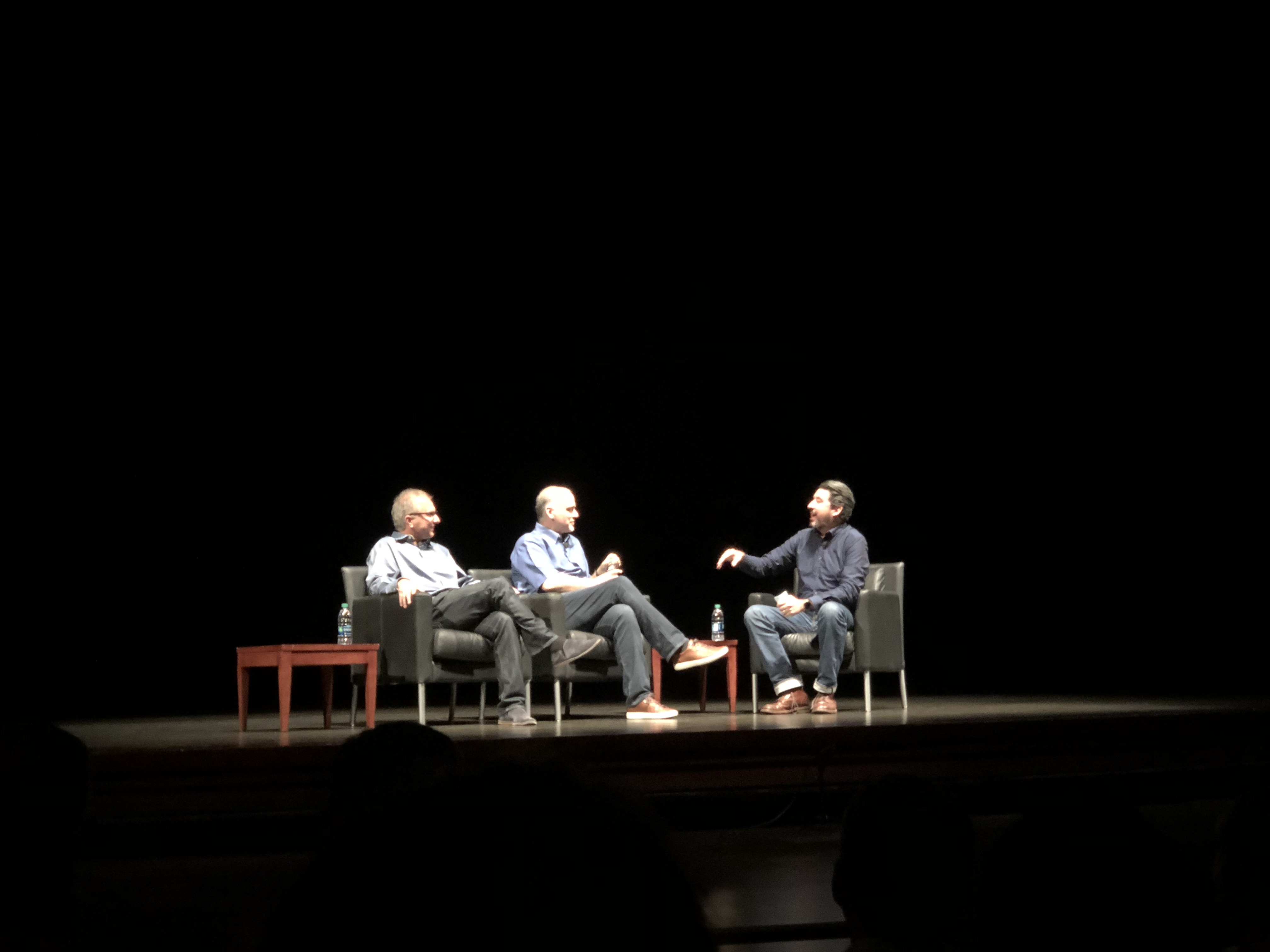 214 - Building for Voice with Siri Shortcuts

I think this was my favorite live show of all. Relay produces some of my favorite podcasts, and I was really excited to see them live, and they did not dissapoint. Jason Snell and Serenity Caldwell provided some great analysis, while Myke and Federico provided some great fun banter. And Stephen provided some amazing trophies. You should listen to the live episode of Connected if you haven’t already.

I also got the chance to chat with a few of the Relay hosts, and just wanted to say thanks to everyone who took the time to talk with me!

Stephen’s amazing trophies being passed out

411 - Getting to Know Swift Package Manager

Some might say that Apple holds this big developer conference as an excuse to bring in a big artist to perform a show for them. I’m not sure if that’s true, but the Bash has plenty of excitement. This year’s headliner was Panic! At The Disco, who I think did a really great job performing.

There was also the free food, drinks, and the various lawn games, but you don’t care about that stuff.

Here are a few videos from Panic’s performance:

WWDC is a great conference, and I’m super thankful to Apple for awarding me a scholarship. I never would have expected to win, or even to be at the conference at all any time soon! It was a truly great experience, and I hope to one day return to the conference again, whether that be as a scholar or (wallet allowing) as an attendee.

If you’re a student that’s remotely interested in developing for Apple Platforms, and you haven’t applied for a scholarship to WWDC, do it. Take a look at past submissions to spark some ideas or give some kind of scope of what to build. You don’t need to make something super elaborate, my submission certainy wasn’t. Just make something that tells a story that you care about, and maybe try learning a new technology along the way. There’s a lot more to a submission than pure code prowess. I know I’ll certainly try to apply again next year (the last year I’ll be elligable), and I hope you will too.